Changing the Facts to Suit Yourself 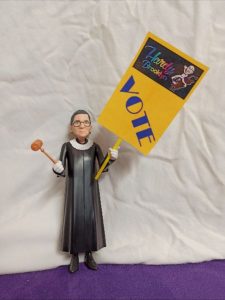 I was going to originally write a nice fluffy story of how people are using art to get through the pandemic. But my mind has dramatically shifted based on events that have unfolded around the world in the past two weeks, and especially in the US. As far as the political climate and how people are being controlled and manipulated by fear.

If you keep reading, I promise I’ll go back to my personal interactions and requests for art during the pandemic times in a future installment.

What brings me to write this is the death of someone who was truly in the one percent of all the people that have ever lived. (Estimated at 100 billion people, that means she was definitely in the top ten million of all humans ever – still pretty good.)

I apologize – the joke hit one of my editors. (The one I’m not married to.) Back to my newsletter article.

Supreme Court Justice Ruth Bader Ginsburg improved the lives of countless Americans throughout her life, first as a top law student, advocate, trailblazer, and, of course, she was also a loving wife, mother, and grandmother. The causes and people she supported benefited immensely from her intelligence, dedication, and zest for life.

And her dignity. This United States citizen extraordinaire contributed to Americans and America throughout her remarkable life. And she struggled to stay alive and hang on, hopefully until a new president was elected.

We must fight to make her dying wish a reality.

With the Senate in control of the Republican Party, the minority party is commandeering the power away from the vast majority of our country – and in broad daylight. We must thwart their every move from now until the end of time – and, let me tell you, Hardy Brooklyn did not come for the end times.

When I talk to people about these topics, I am dismayed and disgusted at how uneducated and uninformed the American voter is. What they say is completely and utterly NOT TRUE. More and more, people are using language to redefine facts into falsehood to support their own beliefs.

That’s how things have been portrayed on TV for years, decades even. Science isn’t science and facts aren’t facts. People think “I can say what I want, when I want, and then a couple of hours later, I can say the opposite.”

And it’s not just politics. In my experience as a business coach and consultant, and now as a life and business coach, I see this happening more and more. Clients, customers, vendors sometimes say one thing on the phone, and then when it’s time to follow up in writing (if that even comes), it’s a completely different story.

In 2020, I’ve had individuals make statements to me, email me backup documentation confirming the statements, and then, further down the line, completely deny that they did so. And they even tell me that I created the emails!

It’s incredible. Even when there were multiple people copied on the emails. Sad.

It happens in social circles as well. People hosting a party say you can do something and then change their mind, for whatever reason, and it’s literally like flipping a switch. Instead of admitting they changed their mind, they deny they ever said it in the first place.

Because you always have to be right and you can never change your opinion. Really?! Guess again. I’d like to say, “I wasn’t born yesterday” because someone might say, “No you weren’t.”