I’m back from Burning Man, from my second annual adventure to the Playa. I just want to recap with you a bunch of lessons learned, experiences I’ve taken away, and what that will (hopefully!) make me a better person.

One big lesson that I learned, something I experienced over and over again, was that when you take capitalism and money out of the picture, most people are inherently good; and most will help others without any expectation of a reward or their own personal gain. This was demonstrated when people had mechanical problems with their bicycles received help from someone else—sometimes hours of their time—with nothing more than a sincere “thank you” as a reward.

Or it was as simple as somebody needing creamer for their coffee, and it became a multi-person adventure to find just the right creamer for that person’s dairy-free diet. (And no, the person was not me!) I witnessed kindness repeatedly. For example, somebody dropped their phone while dancing late at night—and miraculously had it mailed back to their house after they returned from Burning Man. Needless to say, an average of about 1% of the attendees (aka “the humanoids”) lost their phones on any given day, and they were turned in to the Lost and Found. And it wasn’t just phones; it was everything from wallets full of cash and substances to fancy, expensive clothing.

Going to Burning Man for the second year, camping with some of the same people and a lot of new people, and being more involved in the actual camp process and the existing-at-the-Playa process, I felt more comfortable without capitalism or money being present. When you needed something that you happened to have forgotten or had not been 100% self-reliant for, sourcing it was relatively easy, assuming it was actually present somewhere on the Playa.

Whether you were helping someone find what they were looking for, or someone was helping you find what you were looking for, it was always a mutually positive experience without money or wealth being taken into account. In my camp, there were people that can barely scrape by and did a fundraiser to get enough money to get to Burning Man. There were people that were easily able to finance getting there. For everyone, the expected contribution was, simply to be present. Nobody ever said or mentioned or even hinted at “I brought better of this, I brought more of that, you’re not carrying your weight,” which made for an incredibly pleasant experience as I was one of the two Anglo folks in my camp.

Some other lessons that I learned: it’s incredibly important to be prepared; and sometimes carrying a little extra bit of weight is important. An example is that, this year, the temperature was about 20 degrees hotter than last year. For approximately the same number of people as last year, our camp used at least 5 gallons more water per person this year—and most of us did not shower this year, while last year we showered almost every day. I was prepared to try alternative methods of washing up, but the temperature increase made it so the sweat just evaporated away. I did learn that I need to be more conscious of my water usage and intake; if it had been 25 degrees warmer, it would have been an interesting situation! (But I’m sure that fellow Burners would have figured it out.)

Another interesting experience was that, beforehand, I thought I wanted to do all these experiences when I got to Burning Man, but once I got there, the ones that I decided to do (or the ones that were presented for me to be able to attend) were very different from those I thought I wanted to do. I’ve heard people say, “the Playa provides what you need, not what you want,” and I would say that I got to do a lot of self-reflection on where a lot of my rage comes from. I realized I had been holding on to a lot of things that I hadn’t even been aware of. Things that were basically constraints or ideals that my parents and people around me perceived to be important. Being me, being me, being me and myself, and being proud—no matter how I dress, no matter what I wear—is not my problem. It is the problem of those that are trying to create rage in me.

It taught me that people are always parenting each other instead of adulting themselves, and there comes a time in your life when you no longer need to be parented any more. You need to treat each other as adults, and those around you that are still parenting you need to be called out. We. as a society, are very, very good at projecting our own fears and inadequacies on everybody else around us. I am—or was—a huge offender and now I am working hard to correct that. I have had conversations with my children; I attempted to have a conversation with my father. (We’ll see how that goes as time goes on.)

Since I’ve been back from Burning Man, I’ve had positive conversations with other adults. Most people do agree with me. As I‘ve been told many times, when you put it in that perspective yes, once you’re an adult it’s time to stop parenting and start adulting. It doesn’t mean you have to grow up. (Which I really haven’t done, but I am becoming more of an adult.) Adulting really means expressing your own feelings, your own concerns, and your own opinions—not what you think someone else should be doing, because they can adult themselves. You can give them advice or guidance, as long as it’s properly framed in a respectful manner and doesn’t violate their boundaries.

Burning Man, like all other events, has its positives and negatives. You have to take away from each event what you want to get out of it, or what you need to get out of it. I have now gone twice in a row and have seen a significant increase in commercialization and outside world communication. I personally feel that they both take away from the event, and have chosen not to do either. I didn’t carry a camera around or have one of the many photographers that offered follow me around. Sometimes two weeks off the grid with NO communication is an amazing thing! Since I’ve been back, I feel much less rage and am much better at communicating my anger or dissatisfaction, instead of raging out. I know that’s something that you never expected to come from the perfect Hardy Brooklyn! Everybody can always use some self-reflection and some self-improvement in a positive, all-inclusive manner.

I look forward to participating in Burning Man 2020 with all of the people I camped with in Tribal Tendencies that can make it to the next Burn. Thank you once again for an amazing Burn! 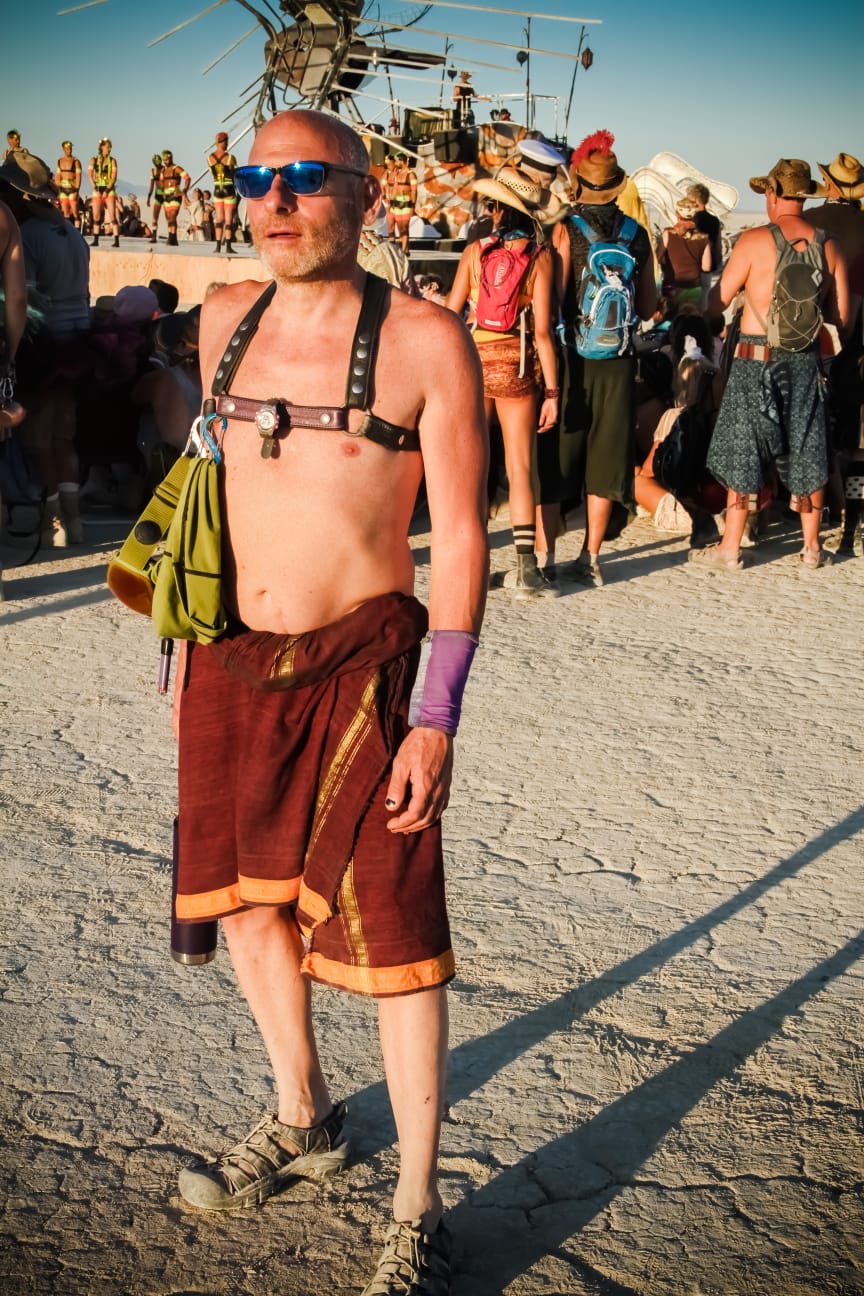